About the culture in New Caledonia The word "Caledonian" is used by the French and others who have settled in the islands. The term "Kanak" is used to designate native residents of this South Pacific archipelago and their culture.

Identification. The Kanak culture developed in this South Pacific archipelago over a period of three thousand years. Today, France governs New Caledonia but has not developed a national culture. The Kanak claim for independence is upheld by a culture thought of as national by the indigenous population. 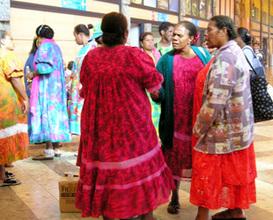