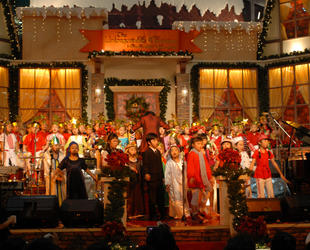 Let’s make it clear that I am not a religious person and I do not attack any religion here. I am just sharing my personal experience in a church in Indonesia where 90% of the people are moslim.

I last year in church with my new girlfriend. Of course, I only do her because I'm not Christian. It is very busy here. I have taken my notebook, so I have at least something to do and that keeps me calm. These entire sessions last for up to three hours. She also wants to stay there until the end.

That is very important to her, and alright I try to follow her since we were very good together .

After 30 minutes, I'm getting tired of those extreme believers, but according to my girlfriend I am a good boy acting to not mind these sessions with her? I am now surrounded by Catholics and wants to leave, again after ten minutes arriving here. So I keep writing (what I have not done on paper sine a very long time), I hope that time can goes very fast this way.

It's now an hour later, we had to get up, but it took me too long, so I sat down again. The rest will remain up for around 45 min. 90% of the people in this church are Chinese-Indo. I just heard that it will take three more hours. I'm embarrassing to tell my girlfriend that I can not hold it for so long. I feel like drinking a cold beer that moment. Still had a hangover from a pub the night before.The priest preaches in Indonesian. I do not understand anything and I do not want to. They are still singing for over half an hour. I do not let myself be fooled. I'll stay for a maximum of one hour and I'm really up to my limits with this.

It's hot here, no airco so I’m sweaty terribly. In the meanwhile, I'm being shot by mosquitoes, screaming still awake from the hard Jesus screaming, what not benefits my hangover.

After 45 minutes the whole group starts to sit again, while I wanted to stand , hahaha.

The people have all received a booklet here, where all the texts bear prayers and songs. The priest can not keep his mouth shut. Keeps screaming! Now everyone is going to sing in Indonesian and mixed with Latin.

The believers are going to sing for the third time, I do not start it anymore. I will have a nice bottle of wine with me and after this is finished and we will go straight home and finish the wine bottle there.. I have learned that after having experienced these sore sessions if you are not believer like me. This is also the first and last time to say. JESUS!

Now the money bag is being circulated to maintain the churches. I realize thunders that half of the money is put in their pocket (especially in this country). I do not understand that these believers reinvent it every time, but it's always their own choice. Now 45 min before the end. These last longer. It's time for a number of prayers. We are in a full-time church (yes what do you expect on Christmas eve)? I estimate it on over a thousand believers. We were here one hour earlier around four o'clock while the sessions started about five o'clock, My girlfriend said we could not find a place to sit down otherwise, that's right because a lot of people were waiting alongside.

Now the group is going to stand and sing again. All of those extremely loud voices. A baby screamed and cried heavily. I agreed totally and felt the same thing completely. The story about the birth is told in Indonesian, while the baby in the background cries further.

The believers may sit down again. After all that writing, I have to say that time goes by quite fast. I've been here for almost two hours now. I think I try to keep it up to seven o'clock (3 hours). I know that my girlfriend really appreciates this, so I expect a special treatment afterwards, hehehehe.

The priest changed the believers to become more fanatics by bringing Jesus along in his prayers.

I'm not impressed. Everybody is here to waving their textbooks for cooling themselves.

I do not care, I will not waste any energy and get more heated up. I'm just writing. People probably think that I'm a journalist, even India's only one foreign face in here. Impressed, I'm good at that.

My girlfriend is coughing all the time, which smokes like me.

Everyone claps into his hands now, I just hit because it's almost finished. The people have risen and seated eighty-eight times. I'm the only one who has been sitting for three hours.

An older woman came to my girlfriend who gave her some kind of oil that she had to lubricate on her throat. She felt a bit better, so it was very friendly from the woman. But I'm not going to blow it up by believing that God sent someone to fix her throat or something like that.

Now there's a kind of peace greeting, where strange people shake hands with each other. That guy who was sitting in front of me gave me a hand while my pencil was still in my right hand, I gave that man a hand. Then I sat down and wrote some more, because it should not take too long. Now another half an hour to go.

It will make me wonder what's more in store for us. At least I have enough stuff in my head to write through. Now the believers will get a piece of bread from Jesus. I'm going to eat some nice dinner afterwards, so no thanks for me! It just seems to be dull dogs, how they are pushing, without waiting in line for a piece of bread. Feel very good how happy I'm not to be involved in this madness.

In my opinion, man has created God and not the other way round. But yes, it does not make sense to argue here ( and nowhere in the world I think). My girlfriend understands better how I am. But still tries to convince me in her way, and I am trying to respect her faith.

It is over!!! We are going to eat some food! And have some wine yeahhhh